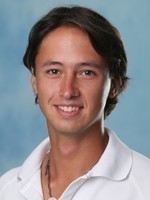 Born in Riga, Latvia, Pjotr had an extremely successful junior career. 2005 Doubles Champion and 2006 Finalist of the men’s singles Latvian National Championship, he also took second place in the European Club Championships and was ranked #187 in the International Tennis Federation Junior Rankings. Pjotr began his college playing career at Mississippi State, where he was ranked #27 NCAA in doubles his freshman year. He went on to finish his college career at University of Detroit Mercy, playing #1 Singles and #1 Doubles, voted Player of the Year 2008-2010, and received the Horizon League Sportsmanship Award. After graduating from U O D with an MBA, Pjotr began an extremely successful coaching career. Pjotr was also recognized by Sports Illustrated “Face in the Crowd.”

Pjotr has been full-time, year-round with Wessen Indoor Tennis from the Club’s beginning. He has developed multiple juniors in SEMTA area and in Europe that have went on to play college tennis with scholarships (Notre Dame, Michigan State, Ohio State, Tulane, SMU, Xavier and list this goes on….