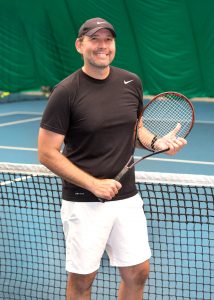 Nick is a USPTA Certified Elite Tennis Professional. He began his teaching career at Rochester Hills Tennis and Swim Club, which went on to become Lifetime Fitness in 2001. He also taught tennis at Lifetime Fitness Arizona and the Arizona Tennis Association, as well as the Portland Tennis Center. Some of his many accomplishments include coaching SEMTA’s Midwest Cup team from 2013-2017 and directing the USTA Midwest High Performand Orange Ball Camp in 2015-2016. Nick has worked with all levels of players throughout his career as a teaching professional. He has coached players who have competed from local to national level tournaments. His students include several players who have earned college scholarships and have played at the college level. Nick is also an ICI Certified Coach, having completed the International Coaches Institute Program, based at the Sanchez Casal Academy in Naples, Florida. The ICI certification is based on the Spanish National Training System. In addition, Nick is also a Certified Personal Golf Instructor and has taught for GOLFTEC.