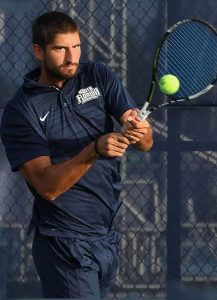 Jefta has been with us at Wessen since the summer of 2017. Born and raised in Mokrin, a tiny village of approximately 7,000 in northern Serbia, Jefta has a rocket serve that has been clocked as high as 140 miles per hour. Named All-Atlantic Sun First Team his senior year, Jefta is a graduate of North Florida University. He played his first two years of collegiate tennis at Western Michigan University, where he was named all-conference each year, as well as being named the “Conference Player of the Year” his sophomore year. In his first fall in Jacksonville, Jefta won four qualifying matches at the ITA All-American Championships and advanced to the Round of 16 at the ITA Southeast Regional Championships.