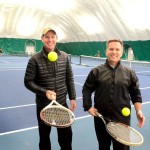 Two lifelong tennis players are inflating Pontiac’s relationship with the sport with the development of the Wessen Indoor Tennis Club, a $2 million indoor facility with two domes featuring both clay and hard courts.

Landscaping work and the construction of a lobby are continuing at the club, which quietly opened late last year just across the Clinton River from the private Wessen Lawn Tennis Club, a redevelopment of the historic former Hayes Jones Community Center with the same playing surface as Wimbledon.

“I always wanted to branch out,” said co-owner Brian DeVergilio. “No one’s really done anything like this for 25 or 30 years.”

“We’re looking to have a facility where any player can come, at any level and at any age,” Dobson said.

A team of tennis professionals are on staff at Wessen Indoor Tennis Club, which offers adult and junior leagues and both individual and family memberships. Grand opening discounts are currently being offered.

Cranbrook Kingswood tennis players were practicing Thursday on the hard courts with Coach Jeff Etterbeek. Cranbrook is one of about seven schools that now practice at the Wessen Indoor Tennis Club.

“This is a fabulous facility. The lighting they have here is just state-of-the-art,” Etterbeek said. “The combination of this indoor facility and the (Wessen Lawn Tennis Club) makes this one of the premier tennis facilities in the country.”