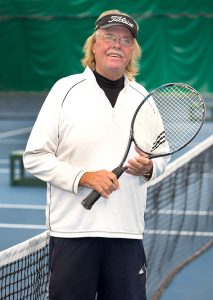 John brings extensive training and coaching expertise with every level player to Wessen ITC. A skilled teacher, he ensures that his students learn good stroke production based on physics and biomechanics fundamentals while having a great time. He is known for his patience and his ability to demonstrate and explain. He takes great pleasure in watching his student’s progress. Several of John’s students have received college scholarships. A few of his students have gone on to successful professional tennis careers such as Arvid Swan, Head Coach, Northwestern University and Mike Woody, Director of Tennis, Genesis Health Clubs (a group of eleven clubs.)

His background includes 30+ years as a head tennis professional at the Troy Racquet Club. He has been ranked as a #1 Tennis Professional by both the USPTA and the Vic Braden Tennis College. For the last six years, he has acted as the JV coach for Troy High School’s boys and girls tennis teams. He was a #1 collegiate player at St. Bonaventure University for four years; acted as a Jr. Davis Cup coach; was a State of Michigan Doubles Champion.