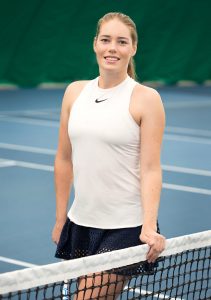 Anna Davydova is a former D1 tennis player. Born in Moscow, Russia, she was ranked one of the top 100 juniors in Russia for the 16’s and 18’s. She has successfully played in several ITF junior tournaments around the world, having reached a ranking of 368. Anna attended University of Detroit Mercy on a full tennis scholarship. Throughout her college career, Anna helped Titans to get to the finals of the Horizon League Conference, and was named “First-League All Horizon,” Second-League All Horizon,” and “Most Valuable Player.”  Her ability to connect with players of all ages and abilities, paired with her positive attitude, helps to bring out the best in each and every individual.