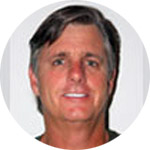 Jeff is the current Cranbrook Varsity Boys’ and Girls’ Head Tennis Coach. A former ATP player, Jeff has a world ranking inside the 200’s for both singles and doubles play. Jeff attended the University of Michigan, where he held the #1 position on the U of M men’s tennis team. A Big Ten Singles Champion in 1978, and Big Ten Doubles Champion in 1977 & 1978, and voted All-American in 1979, Jeff had an extremely impressive college tennis career. Later in life, he went on to instruct at the prestigious Nick Bolletieri Tennis Academy, where he worked with some of the world’s top juniors, including Andre Agassi and Jim Courier.